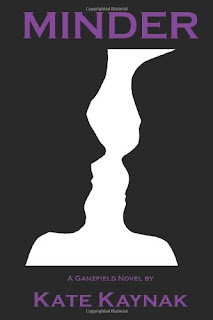 Minder is the first in the Ganzfield Series.  I have to be completely honest, I click dislike on the cover.  I know that if you read the book, it makes perfect sense but if you are looking for something to read this cover hides all of the awesomeness that is inside.  Minder takes you into a world where there are people among us with special skills that they can strengthen by taking regular injections of a drug called dodecamine.  Their skills all come from the mind and work in different ways but all involve energy manipulation on some level.

What am I talking about?  Well, Minders can read minds and sometimes speak into someone else's mind.  RVs are remote viewers who can locate a person or thing that is outside their field of vision.  Charms have the ability to put thoughts into your head by convincing you that something is true or to do something.  Healers can manipulate the body's energy to heal almost instantly.  Pyrokinetics or Sparks, can make fire, put out fire and manipulate fire.  There are even a few telekinetic who can move things with their minds.  In the world of Ganzfield, some people accidentally give others nightmares, set their beds on fire and even witness things from another person's eyes.  But these talents need to remain hidden so that the teens and adults with these skills are not found and exploited by the government ... or worse, eradicated as a potential threat to the mundane people.

Maddie Dunn is sixteen when a run in with some boys from school goes horribly wrong and something awful happens.  She finds herself pulled into Ganzfield, a school/compound for people like her, people who are different.  Maddie is a Minder and a powerful one.  She needs to find her place at Ganzfield and maybe, even do more.  While at Ganzfield, Maddie learns that there are few rules but those that do exist are strictly enforced.  The kids there go to regular classes and practicals to hone their powers.  She also learns that the Charms use their abilities on the others to make themselves the rulers of Ganzfield.  Not cool.  So, Maddie decides to take a stand against them.  From her first day at Ganzfield, Maddie is drawn to Trevor, the only telekinetic at Ganzfield.  Why is she so drawn to him?  Can Maddie change Ganzfield for the better?

I loved this book.  I really did.  When I first heard about these books, the covers threw me off.  But I borrowed the last two books after winning a copy of the first book and I decided to read them.  They looked short so I thought it would be a quick and easy read between other books in my To Read pile.  Well, they are a quick read but it's because they are SOOOO good!  I loved Trevor most of all (I named my Kindle after him) because he is so sweet, kind, loving and brave.  Trevor is just awesome.  Maddie is a great female lead because she is pretty kick butt and she isn't afraid of speaking her mind (HA, Mind reader joke!) or asserting herself.  If you haven't read these books, You really should.  I would suggest them for teens over 13 just because they are geared for older teens and adults.  Lots of psychology and science in them and some.... teenage shenanigans but nothing too explicit.


Minder earns 5 Fairies for being an amazingly unique and special series.

This was such a great book!!! Great review!

thanks! I really loved this book and it's sequels. so different and unique!