Hello, everyone, and thank you so much for having me here to chat a bit about my new release, Benjamin Pepperwhistle and the Fantabulous Circus of Wonders!

For a while now, I have favored settings with a Victorian-esque feeling. I think it's probably because I have been studying the steampunk literary genre – I am doing my PhD on the topic – which is set in that era, and I've also been living in London, where sometimes it feels like you can almost still touch with your fingertips the shadows of the Victorian age, so strong are its influences. Perhaps what I like the most is the effect obtained when adding a layer of whimsical over that Victorian base – adding little curious things, strange characters, irregular elements that, while not strange enough to push a story into the realm of fantasy, are nonetheless not quite... real, either.

And what setting can be more alluring for a fan of whimsy than a circus?

I had been wanting to set a story in a circus for a while, but somehow I had never gotten around to it. When I started thinking about another idea for a short story involving guns could be – the first one had been the meeting between a bounty hunter and his prey in the Wild West, for the first Weight of a Gun anthology – I was mostly fumbling around without any specific ideas... and then one night I went to see a Medieval show at a nearby town, and there was a juggler who eventually started throwing knives at a bullseye while his assistant stood in front of it.

And that's when the idea struck me!

A William Tell-like pistoleer offered exciting possibilities. I was immediately drawn to the danger and the tension that come with standing before a target while somebody is shooting at you (although I would never, ever do it). It must be thrilling and frightening at the same time; it must require infinite trust and familiarity with your partner. And what about being the one who pulls the trigger, what about knowing the life of the person before you is in your hands, that they are entrusting themselves completely to you? And what about doing all of this in public, for the entertainment of hundreds of strangers?

The possibilities of tension, of intimacy, of exhibitionism, of trust, fear, and elation were just so intriguing, begging me to be explored. And I love that I had the chance to do it in the setting of a circus. I used to perform in a theatre company, and I remember the strange familiarity that comes with sharing such an experience with a group, night after night, sharing the tension and the tiring rehearsals and the long trips to the show locations and having to depend on each other when you're out there, blinded by the lights, in front of the public... I imagine this can only be heightened when the group of performers lives and travels together, as well, when they are each other's family and only home, too.

So I tried to portray what might happen when a newbie plunges headlong in the little, cordoned off fragment of world that is the Fantabulous Circus of Wonders, and further narrowed down Benjamin's world to the sandy ring and the red and yellow bullseye, as he stands before Cole Beauchamp's gun. I was surprised at the intensity of the emotions that writing this story evoked in me, and I warmly hope I have been able to pass them along through my words for you to enjoy :)! 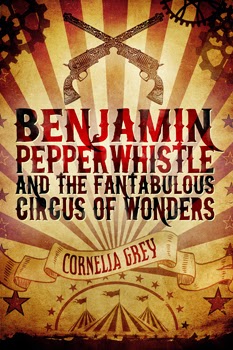 Benjamin Pepperwhistle and the Fantabulous Circus of Wonders
Now Available for $2.99 at Storm Moon Press

Benjamin Pepperwhistle has one overriding desire: to handle the glorious machinery that is a gun. So when he decides to run away to join the circus, it's only natural that he should seek out the legendary pistoleer, Cole Beauchamp, and beg to be his assistant. Life in the circus has definite ups and downs, but as Benjamin settles in to his role, he finds that some perks are even better than he'd anticipated.
Posted by Megan at 7:08 AM