Not Your Typical Romance 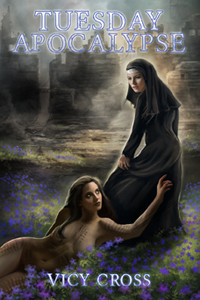 It is my pleasure to guest post at Amethyst Daydreams today. Thank you for inviting me. Storm Moon Press released my debut novel, Tuesday Apocalypse, this summer. I had a blast writing all the suspenseful horror scenes, but my hardest challenge was figuring out how to portray an authentic love story set during the end of the world.


So the saying goes, "everyone loves a good love story," ...but do they? I'll be the first to say I'm not a fan of sugary romance stories. Sure, I enjoy happily-ever-afters just as much as the next gal, but I also like authentic characters who pursue realistic relationships and goals. There are many romances about alpha-male billionaires and brooding, antiheroes. And I was tired of the "spunky heroine," and so I made the love story in Tuesday Apocalypse an awkward, fragile affair that was subject to the stresses of survival. Just how do you approach the person you love when the entire world is crashing all around you? There certainly wouldn't be any room for roses, phone number exchanges, or Valentine's Day chocolates—not when people are dying and Nazis are prowling outside your door! This concept really appealed to me.


An apocalyptic love story had no need for spunky princesses or handsome princes. It would only deal with the grittiest and most passionate elements of a romantic relationship without all that extra fluff.


I remember being entranced with The Diary of Anne Frank, and how precarious and undecided Anne Frank's budding romance was with the quiet, Peter Van Daans. It was a pure, innocent love without the usual frills I read in most romance stories. I must've been in middle school when I first read The Diary of Anne Frank, but the straightforward nature the love story haunted me.


Naturally, when it came down to writing my own story, my characters went about falling in love without the stars aligning, or the word, "destiny," leaping off their lips. They fell in love like real people, and like most real love stories, the relationship that followed was complicated.


My main character is a principled nun, and her suitor is a British WWII soldier. Falling in love is out of the question for nuns, however her attraction is there all the same. Her forbidden desire for this young man is the crux of the love story. Throw in some tentacle monsters and a world war, and her hesitance to ride off in the sunset with the guy is understandable.


I often wonder where romance novelists draw their inspiration. My love life is not very interesting, and I'm not sure how successful I'd be incorporating my personal experiences into my books. So I really stepped outside of the box with this story and tried to present what I felt was the most essential ingredient in a romance. Cheesy as it sounds, I truly believe honesty is the most important factor. If you boil a love story down to its bare bones and most basic principles, all that really remains is the trust that binds the two characters together. In an extreme survival situation, honesty is everything. The rest is secondary. I'll always believe the best love stories are the simplest ones, and I hope readers will feel the same when they read my story.


Thank you again for having me on your blog. I hope you'll invite me again when I have another release. Enjoy the excerpt and blurb for Tuesday Apocalypse below! Blessed be and Namaste.


In the war-weary year of 1940, just one rundown hospital survives London's collapse. Sister Barbara, a nun and volunteer nurse, inspires hope in her patients, but that faith is shaken when an unidentified aircraft explodes near the hospital. The half-eaten corpse beneath the mangled wreckage appears to corroborate the pilot's story that some sort of "tentacle-monster" attacked his plane. However, Sister Barbara pushes these dangers aside and plunges beyond the rubble when the man she loves disappears in the wastelands.


She discovers a bloodstained beauty in his place—but the girl's outward innocence hides a voracious sexual appetite, and an even more disturbing secret. One by one, the terrified patients vanish from their beds. Titillating tentacles lick the hospital walls at night. And the dreams, always the dreams, drawing Sister Barbara deeper into a well of madness. She suspects she and the other women at the hospital are transforming into something... unholy. Sister Barbara knows she must figure out what before the evil in their midst consumes them all.


After a few minutes of rowing, he released the oars and let the boat drift along the gentle current. He did not stop smiling and the moon highlighted the sudden gleam in his eyes. "Cold?" he asked, observing my trembling hands.


I swallowed hard but couldn't find my voice. Despite the lewd dreams I had been having lately, in real life, Rob had never done anything to suggest the slightest sexual interest in me. Although he had confessed romantic feelings in the garden, he had never attempted to kiss or touch me afterwards—and, until we were sitting alone in the boat together, it did not occur to me that Rob wanted to do those things.


The unmistakable change in his demeanor quickened my pulse.


Rob's deliberate gaze explored every inch of my body. His keen, pale eyes suggested sex, but although he analyzed me, he remained cool and relaxed. He kept to his side of the boat and waited for my response.


Moonlight bathed our faces and washed our hair with silver, but Rob continued observing me in silence.


I do not know why, but my heart began to pound. I couldn't catch my breath or maintain eye contact with him for more than a few seconds. Each time I met his stare, I blushed and became more aroused. Desire simmered beneath his quiet, watchful expression and I could only think of my blinding attraction to him. So strong were my primal urges, I could not breathe.


The dinghy felt smaller and the clinic seemed so far away. I clenched the edge of the boat until my knuckles turned white.


Rob spoke at last. "You're being very quiet, Sister. I wish you would say something."


I decided to get straight to the point. "Why did you ask to see me tonight? Why are we here?"


I did not know what to say to that—he had not answered my question. "I... I want to know why you brought me here." I swallowed hard but my voice had already tapered to a whisper.


Rob's gaze lingered on my face. He studied me for a few more seconds. "If you are cold, come here and I will hold you."

Vicy Cross' favorite indulgences are horror, sci-fi/fantasy, and speculative fiction, however she'll dabble in any genre where there's hope for a good story. In addition to writing full-time, she is a veg*n political activist, hoodoo witch, and empath. Her first novel, Tuesday Apocalypse is now available through Storm Moon Press. You can find Vicy on Twitter @VicyCross and on her blog or on Facebook.
Posted by Megan at 12:00 AM